Don't You Know If You Help Them, They Won't Go

The tragic events of May left people dazed. Desmond Tutu said “God, please, please forgive us.” As the nation struggled to come to terms with the violence that had been unleashed, shelters were set up, communities helped people that had been displaced, and the questions were flying back and forth: how could this have happened? It was a time for soul searching. The irony wasn’t lost on anyone that these attacks had happened in Africa Month. Fabian Adeoye Lojede and the cast and crew of MNET’s Jacob's Cross met at The Village Walk Mall to donate food and clothing to the victims of the attacks. A woman saw them and asked Fabian what they were doing with all the clothes and food. Fabian told her. Without skipping a beat she replied, “Don’t you know if you help them, they won’t go.” Then she got into her BMW and drove away.

I had met Fabian through his business partner, director Mickey Dube. Over the years we had discussed, at various occasions, our visions of African Cinema, the kinds of films we wanted to make and African politics. He was someone I wanted to work with. I also wanted to work with Hakeem kae-Kazim, our last collaboration was God Is African and we had been looking for something to work on. With the three of us committed to the film we agreed to commission someone to put together an extensive research package into the riots. Using our own funds we hired a lady that came highly recommended. She promptly got to work.

She returned months later with boxes of books, recordings, testimonials, comments and analysis. All of us received a pack and we started the process of going through the research. In the pages of those research documents lay the foundation of the film that would later be called Man On Ground. 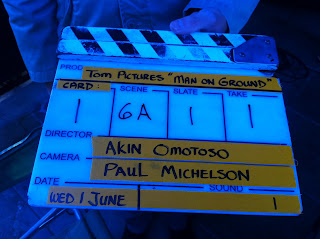